On the 19th June 1915 when the War Diary starts, the Battalion, commanded by Lieutenant Colonel J Carden,  was stationed at Cowshot.  The main body embarked on the SS Franconia on the 30th and sailed the following day.   They arrived at Gully Beach, Gallipoli on 17th July.  After 2 weeks the Battalion was redeployed to ANZAC Cove.  The Battalion suffered heavy casualties on 10th August and over half the men were never seen again.  After reorganising at Sulva Bay, the Battalion was evacuated in mid December.

It’s not clear when Ptes BAILEY and SPANSWICK joined the Battalion but it’s most likely that they were held in reserve at Mudros Bay, Lemnos  prior to joining the Battalion on 14th January 1916.

The Parish Magazine for July 1915 lists Charles Henry Bailey, Royal Engineers amongst those from Burbage joining the Army.  However, the Vicar appears to have made a mistake.  Although medal records exist for Sapper Charles H Bailey, Henry Charles Bailey joined the Wiltshire Regiment.

Henry joined the 5th Battalion, Wiltshire Regiment, probably at the same time as Frederick W Spanswick (21018) so he may have served first the with 3rd Battalion.  Henry’s medal card records entry to theatre (Balkans) on 4th December 1915 and the Battalion War Diary notes the arrival at Sulva Bay of 61 soldiers on the 7th.  The Battalion withdrew from the Dardanelles in mid January 1916 and sailed for Mesopotamia arriving at Basra on 1st March.

The May 1916 edition of the Parish Magazine correctly lists Chas H Bailey as serving with the 5th Battalion Wiltshire Regiment and reports him as ‘wounded’.

The Parish News for March 1917 reported that Ben was wounded again in the fighting on 9th – 10th January and died a few days later.  Records also show that he died of Wounds on 13th January 1917.  He is buried at the Amara Military Cemetery in Iraq.

William Flippance’s background has been researched mostly online but with reference to the Parish Magazine and the Burbage & Easton Royal, Royal British Legion Book of Remembrance.  There are inconsistences; please let me know if I’ve got it wrong!

William George Flippance was born during the Autumn of 1881 and his birth registered in Pewsey, which at the time included Burbage and Milton Lilbourne.  The son of Henry and Janet (nee Pearce), he grew up in Milton with his younger sibblings.  The 1891 Census records the father’s occupation as Agricultural Labourer.

William joined the Coldstream Guards in December 1900 and was at the Guards Depot, Caterham for the 1901 Census.  His attestation papers tie his date of birth, and the names of father, mother and siblings to the 1891 Census.  William served with the Coldstreams until December 1908 both at Home and overseas where he was awarded the South Africa War Medal with Clasp ‘Cape Colony’ and the South Africa 1902 Medal.

By 1911 he was back with his parents at Westwick, Pewsey where he worked as a cowman.  He married Minnie Compton in the spring of 1912.

In March 1915, the Parish Magazine reported that William G Flippance was serving with the 3rd Battalion Wiltshire Regiment.  He later joined the 5th Battalion and entered the Balkans theatre of operations on 12th July 1915.

William died on 9th April 1916 whilst serving with the 5th Battalion.  He was one of 21 killed that day near Sannaiyat, Mesopotamia.  His name is recorded on Basra Memorial, Iraq. 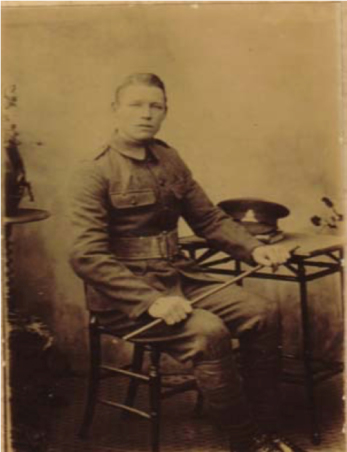 Walter Hillier was born Cox’s Cottage, West Grafton in the Autumn of 1892.  His father, Frederick, was a general labourer at Kilwesdon Farm and later a railway labourer in Burbage, his mother’s name was Fanny.  The family moved to Long Drove in Burbage in 1896 to a house that had been in the Hillier family for 3 generations before them.  Walter had 4 brothers and 5 sisters.

Walter went to the village school, after which he worked on Gent’s Farm at Wolfhall until he enlisted.

Walter’s elder brother Reuben served with the 2nd Battalion Wiltshire Regiment from 1911.  He was captured in 1914 and sent to POW camps in Germany.

Walter enlisted in the Wiltshire Regiment and served with the 5th Battalion.  The Battalion formed at Assaye Barracks Tidworth in August 1914 and on 1st July 1915 sailed from Avonmouth on the SS Franconia.  By 17th July all were ashore at Cape Helles on the Gallipoli Peninsula.  The Battalion left Gallipoli for Port Said, Egypt, in December 1915, and it was reported that Walter had been in hospital with diphtheria at about this time.  In February 1917 the Battalion sailed to Kuwait and then Basra in Mesopotamia.

On 12th April 1917 the Battalion advanced on the Turks near Deli Abbas.  Under heavy shell fire they dug in 2500yds from the enemy.  The War Diary gives little additional detail except that Walter was killed in action and later awarded a Mention-in-Despatches.  After the war it was reported that Walter was helping another Wiltshire Regiment soldier, who was struggling back to a dugout, when he was shot.

Walter’s MiD was published in the London Gazette on 15th August 1917.

Walter is listed on the Basra Memorial.

Until 1997 the Basra Memorial was located on the main quay of the naval dockyard at Maqil, on the west bank of the Shatt-al-Arab, about 8 kilometres north of Basra. Because of the sensitivity of the site, the Memorial was moved by presidential decree. The move, carried out by the authorities in Iraq, involved a considerable amount of manpower, transport costs and sheer engineering on their part, and the Memorial has been re-erected in its entirety. The Basra Memorial is now located 32 kilometres along the road to Nasiriyah, in the middle of what was a major battleground during the first Gulf War. The Basra Memorial commemorates more than 40,500 members of the Commonwealth forces who died in the operations in Mesopotamia from the Autumn of 1914 to the end of August 1921 and whose graves are not known.  The memorial was designed by Edward Warren and unveiled by Sir Gilbert Clayton on the 27th March 1929.

Walter’s sacrifice is commemorated on the Burbage War Memorial in All Saint’s Churchyard.

Walter joined the 5th Battalion and deployed to the Dardanelles arriving on 16th July 1915. Consequently, he was one of the first from Burbage to serve in action with the Battalion.  He was reported recently wounded in the December 1915 edition of the parish newsletter.  Odey rose to the rank of Lance Corporal serving with the Battalion.

In February 1918 the Parish Magazine reported that 'News has at last come that Corporal Walter Odey, who was a prisioner of war at Kedos, Katalia, Turkey, and doing well.'