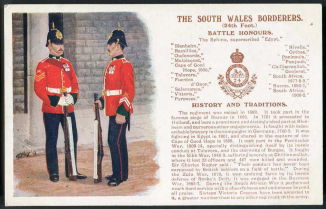 Francis was born in Wells in 1888, the son of Edward, who worked for HM Customs, and Mary.  He grew up in the parish of Milton near Gravesend.

From his regimental number, it would appear that Francis joined the South Wales Borderers in 1905-6.   At the 1911 Census he is recorded at Chatham Barracks, age 23 in the rank of Lance Corporal.  His parents were living in Deptford.

It’s not clear which battalion he served with prior to the war.  The 1st Battalion served in India returning to Chatham in December 1910 and then Bordon, Hampshire from 1913.  The 2nd Battalion was stationed in Tidworth, Aldershot then Chatham until December 1910 when it went to Pretoria, South Africa.

Kelly’s link to Burbage is also unclear.  All we know is that Corporal Kelly was listed as a Burbage Serviceman in the November 1914 list published in the Parish Magazine.

On 29th September 1914 Corporal Kelly was serving with the 2nd Battalion which landed at Lao Shan Bay and fought alongside the Japanese Army against German Army positions.  In January 1915 the Battalion returned to England via Hong Kong before sailing to Gallipoli and landing at ‘S’ Beach, Helles on 25th April.

The Battalion was evacuated from Gallipoli in January 1916 and landed at Marseilles in March before deploying to Belgium.