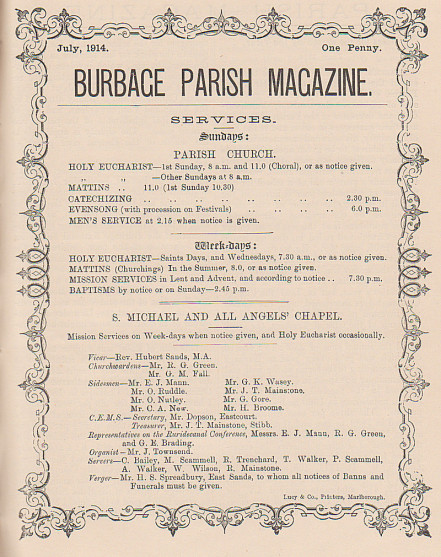 Notes for the Month by the Vicar

The War and its development in Belgium and along the frontiers of France and Germanyand Russia and Austria has absorbed all thought during the past month.  After a gallant resistance, the brave Belgian army has been compelled to retire on Antwerp leaving Brussels in the hands of the enemy.  Rightly may England feel a thrill of indignation when the ravages of the ruthless German army in Belgian territory are reported.  But the allied forces are preparing to check the advance.  We can only be patient and prayerful, and hopefully await the result.  The Day of Intercession was duly kept on Friday 21st August, and naturally the meaning of war and the duty of England and the power of prayer have been the subjects lately dealt with in sermons.  The whole nation is called upon to face a great responsibility.  We must indeed as St Peter bids 'gird up the loins of our mind and be sober and hope to the end'.

At least half-a-dozen of our young menfrom the village are on service.  No doubt others will follow.  the nation needs her manhood to rally in  defence of justice and righteousness against an arrogant and agressive militarism.  May God defend the right!

I have been ashed to act as the representative for Burbage of the Soldiers' and Sailors' Families Association, and shall be glad to be informed of the names of any married men who have been called to the war.

The Harvest Thanksgiving Services. - It is difficult owing to the War, to forsee the character of our Thanksgiving Services for the Harvest, but certainly the Harvestis early and abundant, and promises to be well gathered in.  Never has the country been more in need of a good harvest and favourable weather, and we are indeed grateful.  I have no reason to alter the arrangements made some weeks before the War broke out ........

A very successful meeting was held in Burbage schoolroom on Friday September 11th, to explain the causes and significance of the war and to help stimulate recruiting.  Mr J. D. Crossfield of Durley House, originated the meeting and took the chair.  Mr Peto, MP, was prevented from attending, but the speakers included Mr Hardy, Marlborough, the Bishop of Madras, the Bishop of Travancore and Mr Robert Merriman.  The room was full to overflowing, and the speeches were interesting and eloquent.  About 33 men belonging to the village are now serving in the King’s forces either at the front or in readiness to go.  A list is placed on the board just inside the Church, and our congregation are asked to remember our soldiers and sailors in their prayers, especially at noon, when in accordance with the Bishop’s request, the Church Bell is rung to call to prayer.  I shall be glad to be supplied with any information as to new recruits or the experiences of any who are serving at the front.

There will be a special service at the Church on Wednesday and Friday evening that week at 7pm, and a service for women at Stibb Chapel-of-ease on Thursday afternoon, November 5th at 3pm.

I hope that as many as possible will make a point of attending at least one of these special services, when intercessions will be made on behalf of our Country and the Empire, and for our Allies, in this time of war and trouble.

The following is a list of those who have gone from the village, either to the front or to camp for training: - Maj Maurice RAMC………………………………

This list may not be quite complete.  I shall be glad to know of any names that I may have omitted.  The Stones of Ram Alley, are just in Easton Parish, so they cannot be included in this list.

I should like to add that I have received a letter from Pte A E Spanswick (‘Peggy’), giving an interesting account of the Burbage recruits at the Curragh.  I believe they have now gone to Aldershot.

The War – The British Forces at the front are doing gallantly and recruiting at home has been revived since Lord Kitchener’s speech at the Guildhall.  Lord Roberts has passed away at the age of 82, dying within sound of the guns at the British Headquarters, where he had gone to cheer the troops in their arduous task.  He was buried beneath the dome of St Paul’s on November 19th.  Our ringers rang a muffled peal on the bells that evening.  In the list of those who have gone from the village, published last month, I omitted to mention that Mr J Vines is Quartermaster Sergeant, and that Charles William Popejoy, Army Service Corps was in camp.  Lieut Cyril Wasey, who has been invalided home for a few weeks, has received the distinction of the ‘Legion of Honour’ for bravery in action.  We heartily congratulate him.

News from the front comes slowly, but all will regret to hear that Arthur Bushnell was killed in Action on Oct 13th and that George Vallis has been wounded and R Hillier is a prisoner of war at Gottingen.  The village has had notice that the 7th Gloucesters are to be billeted in it for the winter, but there appears to be some uncertainty about the matter

Work for the Soldiers – in addition to subscriptions already acknowledged in the magazine, Mrs Sands has received from Mrs Bain £1; Mrs Mainstone 7/6, Mrs W Vines 15/-, Mrs Brooke 2/6 and Miss Andrews 2/-; the whole amounting to £4:8:0.  Garments have been sent to the Red Cross Hopital at Marlboroughand the Belgian refugees in London and Birmingham; also 13 pairs of socks and 4 belts to the Queen’s Fund and there will soon be ready 6 or 7 more pairs of socks.  A full statement will be posted on the Church Noticeboard shortly.

Miss Olive Sands reports that £1:11:6 has been raised by the schoolchildren for Princess Mary’s Fund for Christmas gifts to the soldiers at the front.  I also hear that Miss Violet Braime has collected £5 from adults in the village for the same object.

The Day School. - Mr Griffin is acting as temporary Head Teacher in the mixed school.  No news has been heard of Mr Edwards who left on Oct 29th, two days before he was to appear at Marlborough to answer a charge connected with the accounts of the Burbage and Easton Friendly Society, of which he has been secretary since 1907.  The members will be sorry to hear that the books of the Society are left in a very unsatisfactory state and that though fortunately the bulk of the invested fund, viz., over £3900, is safe in the Bank of England, various smaller sums appear to have been drawn, amounting to over £1000, and cannot at present be accounted for. 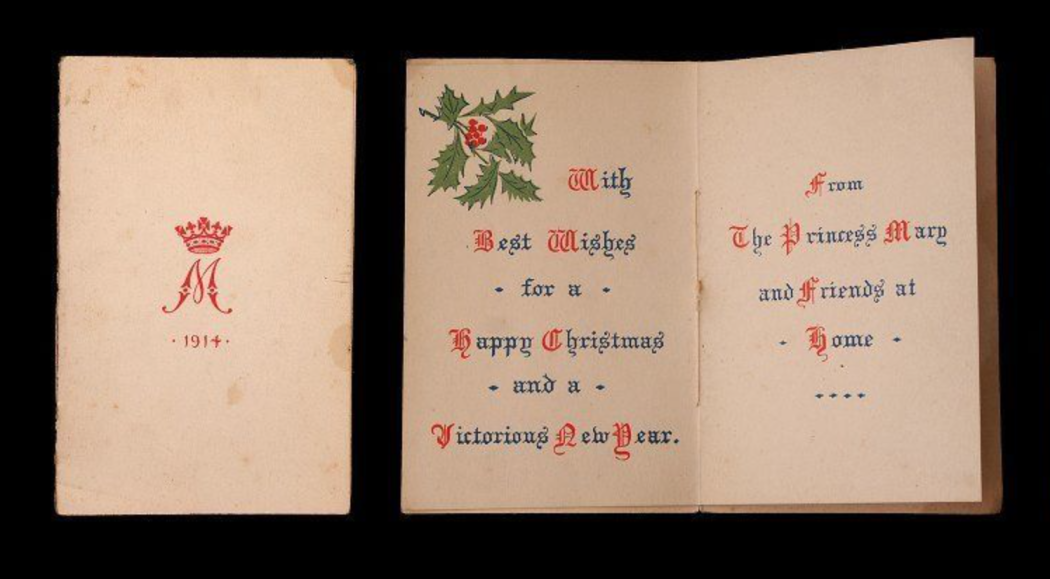