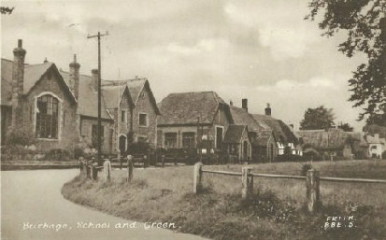 From the Parish Magazine:

December 1914 - Mr Griffin is acting as temporary head teacher in the Mixed School.  No news has been heard of Mr Edwards who left on 29th October two days before he was to appear at Marlborough to answer a charge connected with the accounts of the Burbage & Easton Friendly Society, of which he has been secretary since 1907.

January 1915 - Sixty applications received for the post of Headmaster of the Day School.  Mr Griffin will continue to act as head until one is appointed.

February 1914 - Mr Ernest Stanley Webb has been appointed by the managers as Headmaster for the Mixed School, subject to the approval of the Wilts Education Committee, and hopes to enter upon his duties on February 15th.

March 1915 - Miss Tootell is leaving Burbage for a similar post as certified assistant teacher at Thatcham.

June 1915 - We have had visits from Mr Purdie, HM Instector and Mr  Pullinger, Director of Education for the county. who have both expressed their satisfaction at the improved conditions in the Mixed School.

October 1917 - Mrs Shipp has resigned from the School.

The School Register lists all those attending though detail varies year on year.  The registers serve to confirm who was living in Burbage during the Great War and give some idea of the comings and goings since the 1911 Census. The list is incomplete - more work in progress!

The Robson Act 1899.   The Robson Act raised the school leaving age to 13, but permits 12 year-olds to work part time and allows for the needs of agriculture.