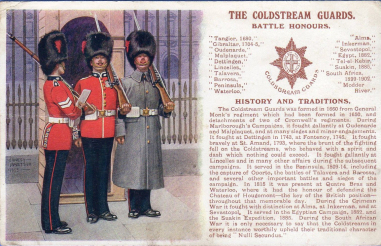 Frank was already a serving soldier at the outbreak of war.  In January 1915, the Parish Magazine reported that both he and Herbert Stone of the Coldstream Guards had been wounded.

Francis’s medal card shows that he landed in France on 12thAugust 1914.  The 3rd Battalion, previously based at Chelsea Barracks, landed at Le Havre and formed part of the 1st Guards Brigade of the Guards Division.

Eldest son of Thomas and Alice Mundy of Easton Royal, Francis grew up in Easton Royal. He had a several sisters, including Winifred and a two brothers; one, William also joined the Coldstream Guards.   In 1898 their father died and two years later his mother married Alfred Stone. In 1911, Alfred and Alice were living at 78 Ram Alley.  As a consequence, Francis was listed amongst those from Burbage who went to fight.

Francis was barracked with the 3rd Battalion, Coldstream Guards in the 1911 Census return.  The entry notes his birth in Burbage, his rank - Private, age 31 and that he was married.

Francis married Sarah Jane Tobin in London in 1906.  He appears to have married again in 1915 to Sarah E in Morpeth.

Francis was discharged from the Army, as a result of a gun-shot wound to the left thigh, in January 1916.  He was awarded the Silver War Badge and the entry on the Roll notes he joined the Army in November 1901.

Before joining the Army he worked in London on the railways and in 1901 was living in Railway hutments in Hullavington.

William Mundy was born on 11thApril and baptised in Easton Royal 0n 25thMay 1884. The 1891 Census lists Thomas and Alice Mundy’s 7 children including William’s elder brother Francis.  Thomas died in 1898.   Alice remarried in 1900 and moved to Ram Alley to live with her new husband Alfred Stone.

William Mundy joined the 3rd Wiltshire Militia at Devizes on 8thOctober 1900 at the age of 17years and 6 months!  He described himself as a labourer for the Marquis of Aylesbury.  He was promoted Corporal and served in St Helena from June 1901 to November 1902.  He was later awarded the Queen’s South Africa Medal 1901-1902.  Cpl Mundy was discharged from the Army by purchase in January 1903.

William re-joined the Colours in August 1905.  His attestation papers refer back to his earlier service and show a new regimental number for his service first with the Wiltshire Regiment then the Coldstream Guards. He served with the Wiltshires in Egypt in October 1905 before transferring to the Coldstreams in April 1906. He was with the 2nd Battalion in London in 1911 and the Census shows he was employed as a cook.  In 1912 he joined the Reserve.  His service papers list his mother and siblings (including Francis Samuel Mundy).

William was mobilised in London in August 1914.  After about 12 months he was posted to the Reserve Battalion.  He married Elizabeth Flowers in Warwick in the 1915 before embarking for France with the 4th Battalion on 15thAugust.  He was employed as a company cook.