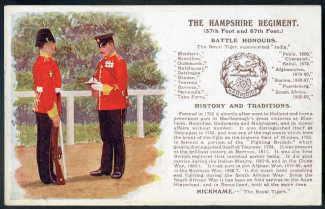 According to Burbage School records, Conward John Banning was born on 21st December 1896; son of John Conward and Eliza Banning.  He was baptised at All Saints’ Church in Burbage in March 1897.  In 1901 he was living on the High Street with parents, sister Margaret and younger brother Henry Alfred.  His father was a Blacksmith.  He went to school in the village from June 1905 to December 1910.  The family were still in Burbage for the 1911 Census.

Pte Banning served with the 2/4th Hampshire Regiment. Records show that his battalion formed at Salisbury plain in September 1914, sailed for India in December, returned first to Suez in April 1917 and then France in June 1918.

The service record for Conward Banning was probably destroyed during the 1940 blitz.  Theoretically, he would have had to wait until his 18th birthday in December 1914 to join the Army and then could not serve overseas until he was 19.  So he could have joined the Battalion in India in 1915.  The Battalion returned to Egypt in April 1917.

Reginald was John and Alice’s third son.  He was born on 18th March 1900, Christened at All Saints’ Church, Burbage on 1st July the same year and attended Burbage School from 1st June 1908.