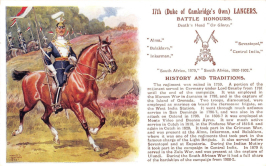 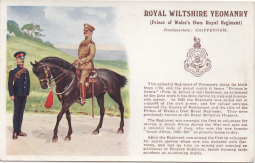 17th (Duke of Cambridge's Own) Lancers.

Burbage Servicemen Serving with the 17L:

The Royal Wiltshire Yeomanry.  The senior Yeomanry regiment of the British Army; a number of Burbage men served in the Regiment before the Great War including John Vines and George Maurice.  A return of strength on 10 January 1914 showed the Royal Wiltshire Yeomanry was the only unit in the 1st South West Mounted Brigade that was up to strength with 24 officers and 437 yeomen.

The August 1915 edition of the Burbage News reported that Norman Henry Norris had joined the Bedfordshire Yeomanry however, there is no supporting evidence.  A medal card records the service of NH Norris with the Army Service Corps, The Kings Royal Rifle Corps and lastly the newly formed Machine Gun Corps.  For further detail see the ASC page