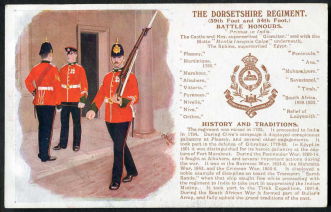 Albert was born in Fulham on 4th November 1892 and Christened in Burbage on 5th February 1893.  His mother, Mary Spanswick, later married John Mist and they lived together in Stibb Green.  Albert attended school in Burbage from 1900 to 1906.

Albert was an agricultural labourer.  His attestation papers show that he enlisted with the Wiltshire Regiment at Devizes on 30th December 1911 and completed recruit training on 9th April 1912.  He then transferred to the Dorset Regiment to serve 7 years with the colours and 5 with the Reserve.  Pte Spanswick served as a company cook.

In 1913 he was serving with the 1st Battalion in Belfast but he was posted to the 2nd Battalion in February 1914 and by October had arrived in Bombay.   From there he went to Mesopotamia.   Albert was hospitalised with Malaria at Amara on the river Tigris in July 1915.  On 22ndNovember 1915 he was wounded in action at Ctesiphon near Baghdad and evacuated first to Kut-al-Amara, then Basra.  Records show he suffered a serious gunshot wound to the right shoulder.