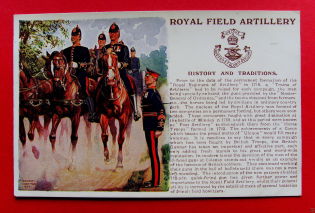 Ernest was born in Basingstoke on 21st December 1895, the eldest son of John, a Railway Signalman and Alice.  Ernest had 3 brothers (including Edward who joined the Army Service Corps) and 3 sisters.  The family moved to 67, High Street, Burbage before the 1901 census and his parents were still there in 1911.  However, by then Ernest was living in Clay Hill, Beenham, West Berkshire working as an assistant gamekeeper.

Prior to enlisting in January 1915, Ernest was living in Llanbadach near Usk, Wales and working as a gamekeeper.  He joined the Army for the duration of the war at Newport, Monmouthshire on 6th January 1915 and was sent to No 2 Depot RFA in Preston before joining 19 (Reserve) Battery RFA at Woolwich.  Gunner Belben was posted to the Expeditionary Force Base Depot, France on 12 June 1915.

He was later posted to Mesopotamia, arriving in November 1915.  On 18th June 1916 he was admitted to hospital and evacuated to India.

On 12th September 1917 Gnr Belbin was posted to 13 Brigade RFA and joined 2 Battery in Basrah and then the RA Depot, Ambala, India.

William George Crosby was the eldest son of James and Jane Crosby.  In 1891, age 6, he was living with parents, his sisters Ellen and Elizabeth, and younger brother Frederick in Eastcourt.  His father was a general labourer born in Great Bedwyn.

William joined the Army in 1903 having served with the 3rd Wiltshire Militia since 1900.  He was discharged from the Royal Army Medical Corps for misconduct in 1905!   It’s not clear what happened next but the November 1914 edition of the Parish magazine records William joining the gunners.  His medal roll record notes he transferred from the RAMC to the Royal Field Artillery and served in Gallipoli from 10th August 1915.

Norman was born on 24th February 1900 and baptised in Swindon on 29th April the same year, by which time he was living with his parents in Shalbourne where his father was the police constable.  He went to school at Sanford Street in Swindon in 1909 and Burbage in 1911 but the family were in Corley Heath, Warminster for the 1911 Census.

Norman joined the 3rd/3rd Wessex Brigade Royal Field Artillery in March 1915 about a month before his elder brother.  His attestation papers lists his address as the Police Station in Burbage.  Norman was given the regimental number of 318 and transferred to the Highland Division Ammunition Column at the end of April 1915, deployed to France on 6th May 1915 and returned home to England on 27th November 1915 because he was under age.  His conduct sheet records his many trivial offences whilst in camp in England including talking and fighting on parade and numerous absences.  He was discharged from the Army age 16 years and 6 months on 16 September 1916.  His conduct was very satisfactory.

Philip was born on 21st July 1898 in Bushton near Wotton Bassett and baptised on 25th September at Christ Church, Swindon.

In the 1901 Census, age 2, he was living with grandparents Edwin and Selina Noad in Belle Vue Road, Swindon.  He went to school at Corsley CofE School and Sanford Street School, Swindon.

The 1911 Census lists him living with parents Frederick, a Police Constable, and Catherine in Corsley Heath, Warminster. He was the eldest of 4 brothers and had one sister.

Philip joined the Wiltshire Regiment in Devizes on 13th August 1914.  He gave his age as 19.  Within 2 weeks he was discharged under Paragraph 392 of Kings Regulations ‘ not being likely to become an efficient soldier’.  It is likely that he lied about his age!

In April 1915 Philip joined the 3rd Wessex Brigade Royal Field Artillery.  Records show that 323 (previously 2188 and eventually 645285) Gunner PE Scammell was transferred to the Highland Division Ammunition Column at the end of April and arrived in France on 6th May 1915.  In October 1916 he was posted back to England but returned to France on St George’s Day 1917 and joined 178 Brigade 40th Division “A” on 23rd May 1917.  “A” Battery was equipped with 18 pounder guns.

Gnr Scammell was badly wounded in December 1917.  His service record lists his injuries as Gun Shot Wound (GSW) to face and right leg with a composite fracture to the fibula & tibia.  His leg was shortened by 2 inches.  The severity of his wounds was reported in the April 1918 issue of the parish magazine which also noted the death of his father in Swindon.