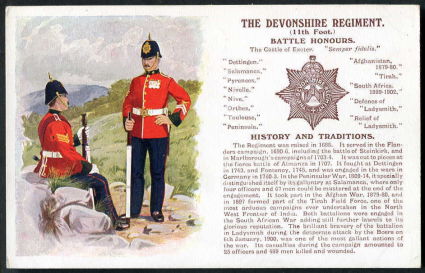 Frederick was born on 18thNovember 1896 and baptised in Burbage.  He is listed in the 1901 Census, living at 91 High Street, Burbage with parents Frederick (a gardener) and Ellen, and siblings Arthur and Victoria.

Ten years later, Frederick age 14, was living in Wootton Rivers with parents and his 3 brothers and 4 sisters.

A few days after Britain entered the war Frederick enlisted in the Wiltshire Regiment.  9282 Private F C Allford attested in Devizes and was posted to 6 (Service) Battalion.  He was discharged 48 days later on medical grounds having been diagnosed with Tuberculosis.

Allford re-enlisted in 1915 and joined the Devonshire Regiment.  Pte Allford served in the 1st(Garrison) and 8thand 9th(Service) Battalions.

formed in August 1915, the Garrison Battalion consisted of men who, although unfit for battle, were capable of discharging garrison duties.  They served in Egypt and Palestine from October 1915 and were the last Devonshires to leave that theatre on their disbandment in late summer 1919.

Later, Frederick joined the Service Battalions and in June 1916 was serving in France.  In September 1916, whilst serving with the 8thBattalion he was admitted to 39 Casualty Clearing Station with diarrhoea.

Pte Allford was awarded the 1915 Star, The British War and Victory Medals.

Frederick married Eva Rogers in 1923 and they lived together in Pewsey.