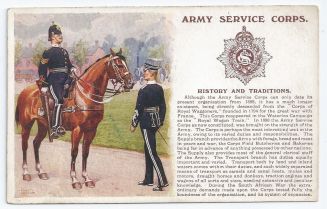 Edward Belben was born in Basingstoke in 1898 the son of John, a Railway Signalman, and Alice Belben.  By the time of the 1901 Census the family had moved to 67 High St, Burbage.  Edward had 3 brothers (including Ernest who joined the Gunners) and 3 sisters.  The family were still living at the same address for the 1911 Census except for Edward who was living at 52 Stibb with the Mainstone family where he was employed as an errand boy.

Edward signed on for one year with the Colours at Bristol on 11 August 1914 and joined the Army Service Corps at Aldershot 2 days later.  His attestation papers show that he was 19 years old, was 5 ft 8 ins tall and weighed 140 lbs.  He is described as having a pale complexion, brown eyes and dark hair.  His occupation was listed as Baker.

SS/242 Pte Belben arrived in France on 5th October 1914.  He served initially with a Base Supply Depot.  In June 1915 he was charged with failing to obey company orders ie not reporting sick when suffering venereal disease.  During April 1916, while serving with 7th Field Bakery, he was readmitted to hospital with measles.

In December 1917, A/202308 Rifleman Belben was transferred to the 10th Battalion Kings Royal Rifle Corps (KRRC) in the interests of the service and a few weeks later reposted to 12 KRRC.  He was posted as missing on 24 Apr 1918 and his record shows he was captured at Offoy becoming a Prisoner of War in Munster III a former Army barracks in Germany.

Herbert Broome was born on 15th August 1888.  He lived with his grandmother Sarah Johnson at 74 High Street from an early age.  He worked as a servant prior to the war.

Herbert joined for duty in Regent Street, London on 12 November 1915.  He was a member of Expeditionary Force Canteen Section of the Army Service Corps who deployed to France & Flanders on 26th November 1915.  He started out with number 1094 but was given the number A-257251 when he signed attestation papers on 26th March 1916.  His service papers were damaged during the blitz but some detail is legible on the chard remains.  The pages record that he was over 6ft tall, that his mother lived in Devon.  It would appear that he worked with TOC H in Boulogne.

Charles was born on 28th September 1876 in Ponders End, Enfield.  He was the son of Edward and Sarah Ann Bushnell.  He was baptised on 10th December 1876 at St James’ Church, Enfield, Middlesex.

Charles grew up in Burbage living at 75 high Street, Burbage with mother and grandparents.  At 13 he was working as an agricultural labourer.  At the time of the 1911 Census, age 34 he was still single.

Charles was one of the first from Burbage to go to War; he is listed in the Parish Magazine of November 1914 as joining the Army Service Corps.  He was given number M2-105734.

Charles was born on 25th July 1896, third son of James and Jane Crosby of Eastcourt.  He was baptised at All Saints’ in August 1896.

In 1901 he was living with his parents and brother Frederick at the shop in Eastcourt and was still there in 1911.

Charles’s service record was only partly damaged during the blitz.  He enlisted for the ‘Duration of the War’ and joined the Reserve in December 1915 age 20 years 6 months.  He first joined for duty on 7th September 1916 for service with the Army Service Corps.  From November 1916 he served with 606 Company, Holland Park as a MT driver.  In July 1918 he embarked at Southampton for Le Havre and joined Army Troops MT Company ASC.   There’s a note to the effect that he joined 11th Divisional MT Company, No 7 Army Troops ‘Machine Gun’ Section, AMT Section ASC and later, in 1919, ‘L’ Signal Battalion.

Norman was born on 1 August 1894 in Burbage.  In the 1901 Census he was living with his father Henry Norman, a publican, and mother Catherine at the New Inn on the High Street.  He had one brother and 3 sisters.

Norman attended Burbage School in 1902 and the 1911 Census has him living as a boarder at Dauntsey’s Agricultural School, West Lavington.

The August 1915 Parish Magazine records Norman joining the Bedfordshire Yeomanry but I’ve found no official record to support this.  The only medal record is for a Norman Henry Norris joining first the Royal Army Service Corps (Regtl No 251042) then the Kings Royal Rifle Corps (Regtl No 201949) and finally the newly formed Machine Gun Corps (Regtl No 143983).  The Parish magazine reported that he was given home leave after being wounded on the Western Front in the March 1918 offensive.