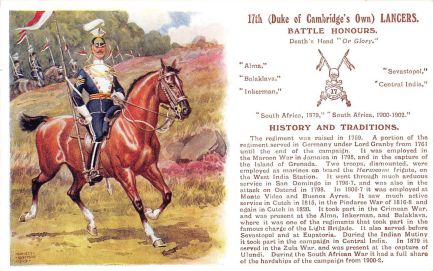 Charles was born in Hilperton in 1872.  He was the eldest son of Edward and Ellen.  After school he became a groom and later a gentleman’s servant.

Charles joined the 1 (Wiltshire) Company 1st Imperial Yeomanry in 1900, age 27, and served 1 year and 97 days before being discharged at his own request in April 1901.  He left the Army having served for over a year in South Africa during the Boer War.  He was awarded the Queen’s South Africa Medal with bars ‘Cape Colony’ and ‘Orange Free State’.

In 1911 Charles was a boarder in Ivy Road, Southampton whilst working as a tramway motorman.   Three years later, in June 1914, he married to Emily Brickell from Shedfield at All Saints’ Church, Burbage.

Charles Scammell was one of the first to go to war in late 1914 and is listed in the Parish Magazine for November 1914 as joining the 17th Lancers.  He would have been 42 years old.

At the outbreak of war, the 17L was stationed in India.  After returning home it deployed to France and from January 1915 was engaged in trench warfare.  Charles arrived in France on 13th July 1915.