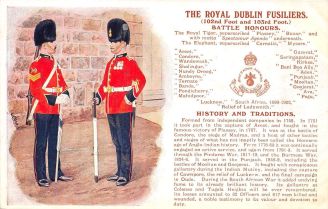 The 7th (Service) Battalion The Royal Dublin Fusiliers was stationed at the Curragh and later at The Royal Barracks in Dublin.  The Battalion moved to Basingstoke in May 1915.

The order to be in readiness for Gallipoli arrived on 27th June 1915.  The 7th Battalion embarked on the Alaunia at Devonport at about 7am on Saturday 10th July 1915.  As they sailed for Gallipoli they were in up-beat mood.  En-route they halted briefly at Gibraltar, Valetta Harbour in Malta and Alexandria, Egypt before landing at Mitylene and then at Sulva Bay on 7th August 1915.

The Battalion were immediately involved in the attack on Chocolate Hill which they occupied from 8-12th August and then the battle for Kizlar Dagh.   They remained in Kizlar Dagh until their withdrawal on 29th September 1915.

Herbert Farley was evacuated to Birmingham Hospital at about this time.  Records show that Tom Gillett, Frank Wort and Alfred Spanswick were also wounded.  A note on Tom Gillett’s records enquires after his health on behalf of a wounded colleague at a VAD Hospital in Birmingham; it could have been Herbert Farley.

By the end of the Gallipoli campaign, the 10th Division, of which the fusiliers were part, had lost 75% of its original strength.  Only a third of casualties at Gallipoli were due to enemy action, most were due to illnesses caused by the extremes of heat and cold, the plagues of flies and the lack of clean water.

On their withdrawal the Battalion was billeted near Salonika where they disembarked on 11th October 1915.  The survivors of the Gallipoli campaign were hastily reinforced with raw recruits from the United Kingdom and Egypt but the 10th Division was short of equipment, supplies and one battalion, the 7th Royal Dublin Fusiliers were still dressed in shorts with pith helmets, and no winter clothing.  These shortcomings were exacerbated by the weather and the attitude of the local Greek population at Salonika, which were respectively bitterly cold and hostile.

November found the Division in Serbia, holding the front line awaiting a preliminary assault by the Bulgarian Army.  They were in a desperate plight.  The line of 10th Division was in savage hill-top country broken by deep gullies, barren rock and scree, its only vegetation scant grass, scrub and scarce stunted oak.  There was a sudden change in weather conditions when a cold rain then a raging blizzard struck the Balkans.  The exposed infantrymen, their health already undermined by privations on the peninsula, deteriorated.  Hundreds suffered frostbite and exposure, hundreds more collapsed with aliments associated with debilitation, cold and under-nourishment.

Herbert Farley was born in Durrington, the son of Charles, an agricultural labourer and Ann.  Two brothers and a sister were listed as living with them at Tilshead, Amesbury in the 1891 Census.  By 1901 Herbert ,age 16, was also working on a farm.  Herbert married Beatrice Shilton in 1910 and they had a son, Herbert, Edward in early 1911.

Herbert attested in September 1914, age 30, initially with the Wiltshire Regiment having previously served with the militia and reserve but on 18th September 1914 he transferred to the 7th (Service) Battalion the Royal Dublin Fusiliers.  His attestation papers show his next of kin, Beatrice, living at 158 West Court, Burbage.

Pte Farley served with the Battalion, arriving in the Dardanelles in August 1915. He fell sick in September that year and was returned to a hospital in Birmingham.

Herbert Farley was discharged from the Army in January 1916. He was awarded the Silver War Badge.

Tom was born in Erchfont  near Devizes in 1892.  Son of Thomas, a carter on a farm, and Carry, he was living at Knowle in Erchfont during the 1901 Census, with his 4 sisters.  Ten years later, at the time of the Census, he was living at the Hollow in Burbage as a border at the house of Charles and Sarah Hawkins and working as a farm labourer.

When he joined the Army, Tom was 5ft 2ins tall, weighed 107 lbs and had blue eyes and brown hair.  His next of kin was given as Martha Giddings (aunt) living in Newbury but his will (dated 7 Aug 15) lists Mrs C Hawkins as beneficiary.   It also states that Tom was a member of B Company, 7th Battalion Royal Dublin Fusiliers.

The Battalion sailed to the Dardanelles in July 1915.  Records show that Tom was wounded in October 1915.

Not much is known about John Hillier’s military service and again the records were probably destroyed in the record office fire during the Second World War.  However, other records show that John was born in Burbage and was baptised on 8th April 1888.  The son of James, an agricultural labourer, and Elizabeth he was living with his parents, brothers and sisters at 28 Stibb for the 1891 & 1901 censuses.  During the 1911 Census, John, a builders labourer age 23, was visiting Collingbourne-Ducis and staying at 54, the home of John and Annie Banning.

John Hillier joined the Royal Dublin Fusiliers with friends shortly after the outbreak of hostilities. He served with the 7th and 2nd Battalions.

Alfred Edward (Peggy) Spanswick was born in 1895 in Burbage.  He grew up in the village with 6 brothers and a sister all living with parents Richard, a farm labourer, and Eliza at 70 High Street, Burbage.  At the 1911 census, Alfred, age 15, was employed as a Telegram Messenger.

Alfred was another that joined-up soon after the outbreak of hostilities.  He may have served with the Wiltshire Regiment before joining the 7 (Service) Battalion The Royal Dublin Fusiliers.  In November 1914 he wrote to the Vicar, All Saints with news of the Burbage Recruits from the Curragh outside Dublin before moving to Aldershot.  The Battalion served in the Gallipoli Campaign from July 1915.  Alfred was wounded in the knee in late September - early October 1915 and evacuated to the Citadel Hospital, Cairo.

Sidney Newman was born in Burbage in 1895. At the 1911 census he lived in Long Drove with George, his father, a farm labourer and his mother, Alice.  Alice died before the 1911 Census, by which time George, Sidney and Edith, Sidney’s sister, were together at 120 Eastsands.

Sidney joined the 7th (Service) Battalion The Royal Dublin Fusiliers at the outbreak of war, probably via the Wiltshire Regiment, and entered the Balkans on 10th July 1915.

Sidney later transferred to the Labour Corps with regimental number 108962.

Frank was born in Kingston upon Thames on 20th August 1891.  Samuel F appears in the 1901 Census as the adopted son of George and Elizabeth Wort living at Stibb.  Ten years later the Census records list him as Frank Wort ‘foster son’.  Burbage School records show he left school on 21 July 1905 to go to work.

Frank was one of several Burbage men who joined the Royal Dublin Fusiliers.  He served with the 7th (Service) Battalion which trained near Basingstoke and deployed to Gallipoli arriving in Suvla Bay in July 1915.  Pte Frank Wort was reported wounded in the October 1915 edition of the Parish Magazine by which time the Battalion had moved to Salonika.