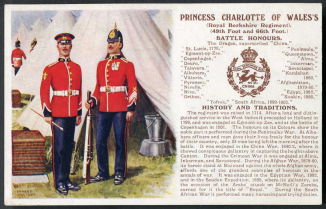 At the 1901 Census Ernest was visiting his brother Frank and his family in West Grafton.

Ernest enlisted in the 3rd Wiltshire Regiment Militia in June 1903, age 18, and was transferred to the Royal Berkshire Regiment in February 1904.  No detailed records remain of his service except that his attestation papers show his father and mother and 2 brothers were resident in East Sands.

Both parents, John (76) & Emily (65), were living at Pall Mall at the 1911 Census.  Meanwhile, Ernest was enumerated at Southampton probably on a troopship either bound for or returning from India where he would have served with the 2nd Battalion Royal Berkshire Regiment which remained in India until the outbreak of war.

Ernest’s medal card shows that he arrived in France on 13th August 1914; probably with the 1st Battalion which arrived at Rouen that day.

On 12th November 1914, whilst serving with the 1st Battalion, he distinguished himself  ‘carrying urgent messages under heavy fire at great risk” and was later awarded a Distinguished Conduct Medal.  In June 1915 Acting Sergeant Harris was awarded a Military Medal and later a bar to the Military Medal.

Ernest was killed in action on 3rd August 1916 – one of two who died that day.

In September 1916 The London Gazette published his ‘Mention in Despatches’.

The memorial transcription on his grave at Vermelles Military Cemetery show his regiment as the 2nd Battalion Royal Berkshire Regiment in a grave next to Corporal T Newman also of the 2nd Battalion who died the same day.   Ernest Harris is remembered on the Burbage War Memorial in All Saint’s Churchyard, Burbage.

William Louis Skittrall was born in the summer of 1896 and his birth was registered in Pewsey.  In the 1901 Census he was living with parents Walter and Ellen, sister Maud and grandmother Emma Kent at 99 Seymour, Burbage.  The family moved to 71 High Street, Burbage sometime before the 1911 Census.

It’s not clear when William joined the Army but his medal card shows no entitlement to the 1914 or 1914-15 Stars so he would not have seen active service until 1916 at the earliest.  The Medal Roll for the victory and War Medals show he served with the 8th and 1/4th Battalions before renumbering and joining the 2nd Battalion Royal Berkshire Regiment.