Leonard was mentioned in the February 1918 edition of the Parish Magazine after receiving the Military War Cross Medal of Belgium for bravery carrying in wounded men under fire at the beginning of the war.  A correction was printed the following month stating that he had been awarded the Belgian Military Medal and Croix de Guerre for bravery in bringing in the wounded under fire.

Leonard was born on 9 October 1891.  He was married to Florence Reeve Bulpitt by Rev’d Hubert Sands at All Saints’ Church on 28th November 1915.  They had two daughters, Stella Renee baptised on 18th March 1917 and Florence Ruth baptised on 15th September 1918.

Leonard is not listed on any Great War medal database and it’s not clear what roll he played in the war.

Thomas Reynolds was born on 18th June and baptised in Battersea on 17th July 1863.  The eldest son of Michael Reynolds and Catherine Hester Williams, he grew up in Merton, Surrey becoming a clerk before joining the Army in May 1884.

He was commissioned in the Royal Inniskilling Fusiliers and served in Malta, the East Indies and South Africa.  His war service included the Burma Expedition in 1886-88, the Chin Lushai Expedition in 1889-90 and the Manipur Field Force in 1891.  He also served as Adjutant of the East Indian Railway Volunteers for 4 years before participating in operations in the Orange Free State and Transvaal during the Boer War with 2nd Battalion.  He claimed to speak French, German, Hindustani and Burmese.  He was promoted Major in October 1900 and retired in 1904 and joined the Militia.

He married Mabel Vaue Russell on 19th April 1904 in London.

Major Reynolds was listed in Hart’s Army List 1908 receiving Retired Pay.  The 1911 Census places Major Reynolds residing in Somerset but notes his absence.  In the 1915 Army List his name appears against the 6th Service Battalion as Second-in-Command.  At that time he would have been 52 years old.  His battalion, formed in 1914, was stationed in Omagh but moved to Basingstoke in April 1915 before sailing for Gallipoli in August.

It’s not clear when Major Reynolds came to the Parish but his name appears regularly in the Parish Magazine from November 1917 when he volunteered to act as Hon Treasurer on the committee charged with raising funds for the Burbage memorial to the fallen. 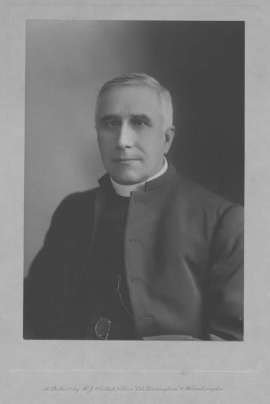 Hubert Sands was born in 1855 in Southwell, Nottinghamshire son of Thomas, a US born merchant, and Jane.  He was living with his parents and 2 sisters in Enfield, Middlesex in 1861.  Jane died in 1862 when Hubert was 7.  Ten years later, Hubert was living as a boarder in Bedford.

Hubert was educated at Oriel College, Oxford , matriculated in October 1874 and gained an MA in 1881.  He was Curate of Solihull from 1878 until 1885.  In 1889 he became Vicar of St Oswald Church, Small Heath, Bordesley, Aston and in 1905 became Rural Dean.  In June 1913, age 56, he exchanged appointments with the Rev R de C Thelwall, the Vicar at All Saints, Burbage.  Hubert Sands was Instituted to the Living of Burbage by the Bishop of Salisbury on July 4, 1913 and Inducted by the Archdeacon of Wiltshire July 21, 1913.

Hubert married Lucy Mary Allport  in Moseley Parish Church in 1889.  They had a daughter and 4 sons.  Their daughter, Olive, was frequently mentioned in the Burbage Parish Magazine.  Leslie fought with the Lancashire Fusiliers and Havilland joined the Royal Warwickshire Regiment.  Arthur and Thomas were too young to soldier at the outbreak of war.

In September 1914 he volunteered to be the local representative for the Soldiers' and Sailors' Families Association (later the association extended it's remit to include Airmen and became SSAFA which continues to help Service families today).

Hubert Sands made a significant contribution to Burbage life, not least in editing the Parish Magazine – the base source for this website.

Olive arrived in Burbage in 1914 when her father, the Rev’d Hubert Sands, took up his post as Vicar of All Saint’s Church.

Olive was born 0n 28th July 1890and grew-up in Aston, Birmingham.  By 1911, age 20, she was a morning governess living at St Oswald’s Vicarage in Small Heath, Birmingham.

Olive Sands played a very full part in Parish life supporting her father’s work.  She was mentioned frequently in the Parish Magazine organising a wide range of fund raising activities.  She organised drama evenings and was on the library committee before the War.   In December 1914 she helped raise money for Princess Mary’s fund for Christmas gifts to the soldiers at the front and set up a class for Swedish Drill and Dancing for girls.  During 1914 and 1915, Olive gave time and money to support charity and help school children.  She took part and ran social events, organised the making of sandbags for the front, and Sunday School treats for the children.

Sometime during 1916 Olive became a Voluntary Aid Detachment (VAD) with the Red Cross. By January 1918 she had worked 1261 hours ward duty at the Auxiliary Red Cross Hospital in the Wesley Hall, Marlborough.

In July 1918, Olive qualified as a physiotherapist and masseur

Frederick Scammell and his wife Catherine moved to Burbage in about 1911.  He was the village constable.  Frederick was born in Donhead St Mary and baptised on 31st March 1872.

Frederick married Catherine Noad in Swindon on 15th July 1899 by which time he was a police constable working in Swindon.  Between 1899 and 1911 they had 4 sons and a daughter.  At the 1901 Census Frederick was living, with wife, mother and two sons, and working in Shalbourne.  A third son was living with grandparents in Swindon.  By 1911 the family was living in Corsley Heath, Warminster and a little later they moved to Burbage.  The April 1912 issue of the Parish Magazine reported the confirmation of Norman and Philip Scammell at Grafton Church on 11th March.  Norman and Philip went on to be servers at All Saints’ Burbage. Maurice was confirmed in Salisbury in February 1913.  Frederick joined the CEMS the same year and Philip became a church banner bearer.