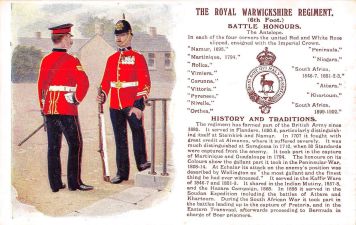 Cyril was born in Marmagau, India on 29 September 1893, baptised at St Paul’s Church, Poona, Bombay and educated at Eton and the Royal Military College, Sandhurst.  He was commissioned into the Royal Warwickshire Regiment in 1913 and served with both the 1st and 2nd Battalions.

Lieutenant Wasey disembarked in France on 22 August 1914.  The December 1914 parish magazine notes Cyril being invalided home for a few weeks and has received the Legion of Honour for bravery in action.  The Legion of Honour (Croix de Chevalier) was an award bestowed by the President of the French Republic for operations during 21st - 30th August 1914.

The Battalion War Diary notes his appointment as Temporary Captain on 2nd March 1915; he was shot in the arm and went to hospital 3 days later.  He re-joined the Battalion in June 1915 and was Mentioned in Despatches.  In September he joined the 2nd Battalion, taking over as acting Adjutant.

Cyril’s father, George Kindersley Wasey, a civil engineer with the railways and GWR Shareholder, was married to Sidney Jane Godfrey in India.  From about 1906 until 1917 they lived at Wolfhall which, at the time, was in Grafton Parish before moving to Lye Hill House in Savernake Forest.  George served as a Church Warden during 1913-14.

The October 1916 edition of the Parish Magazine reported that Cyril had been wounded a second time and was recovering in hospital in Aldershot.

In 1917 Capt Wasey was seconded to the Royal Flying Corps.  He trained as an observer and from 17th October and flew with 16 Squadron.

Capt Wasey was killed in action on 28th October 1917, age 24, near Mont St Eloi, about 10km north of Arras, France.  He was flying in a RE8 biplane and was killed with the pilot when the plane was attacked by a German pilot in an Albatross DV. He was posthumously awarded the Military Cross in January 1918.  He is buried at Aubigny Communal Cemetery.  The pilot was buried in the next grave. 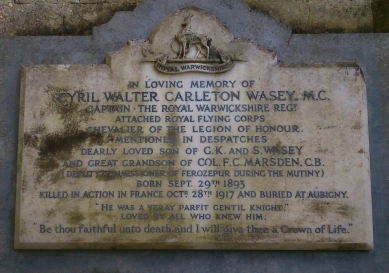 Hubert Sands was educated at King Edward's School, Birmingham  and Oriel College, Oxford.  The second son of the Rev’d Hubert Sands, he commissioned into the Royal Warwickshire Regiment and arrived in France on 30th September 1915.

Second Lieutenant Sands was wounded in June1916 and evacuated to the Empress Eugenie Military Hospital in Farnborough.  The August 1916 Parish Magazine noted that he was recovering from his wounds after 2 operations.  Sands was promoted Lieutenant in January 1917 and returned to duty in May 1917.

The February 1918 edition of the Parish Magazine notes his promotion to Acting Captain on home service in Norwich, as Brigade Bombing Officer.