Burbage - (Stations: Savernake, 1m., GWR and M & SWJR). It is a long straggling village with houses bordering either side of our road for more than a mile.  A turn to the left and then a lane to the right leads us to the Church of All Saints (the turn to the right goes to the hamlet of Westcourt).  It is a modern building having been errected in 1854 on the site of a 15th century Church of which the pinnacled western tower alone remains.  In 1876 a south aisle was added and is now dedicated to St Thomas-a-Becket.  The Register dates from 1561.  Burbage is an ancient villageand in 961 was called Burh-beche, in the D.B. Burberge and Burbete, and in the N.V. of 1316 Borebach.  The name may be derived from the A.S. burh = town, and Teuton beck = brook or from the A.S. bece = a beech tree, ''the enclosure by the beech tree.''

Opposite the Church a footpath leads to our main road.  The road to the south of the Church leads to Grafton Station, 11/2m and East Grafton 2m.  Retracing our steps up the Church lane we may reach Wolf Hall, 1/2m by turning to the right, away from our main road.  Of the actual hall nothing now remains, for it was pulled down at the end of the 18th century, to help build Tottenham House in Savernake Forrest, but an old farm house and a large barn may still be seen.  Wolf Hall became the property of the Seymours in 1426, and here lived that Sir John Seymour d. 1536 whose three children are all known to history.  Jane, Queen of Henry VIII.; Edward the Protector, who was afterwards beheaded, and Thomas who married Katherine Parr, widow of Henry VIII, and who was afterwards beheaded..  In the barn, part of which we still see, was held the marriage feast of Jane and Henry VIII, and that king was feasted here again both in 1539 and in 1543 by his brother-in-law Edward, then Earl of Hertford and later the Protector.  From the Seymours, Wolf Hall passed by marriage to the Bruces in whose hands it remains.  Returning to our main road we continue through the village of Burbage and arrive at a crossroads (sign post), left hand Grafton Station 1m, East Grafton 11/2m, Wexcomb 31/2m, Hungerford 10m, right hand Easton 2m, Milton Lilbourne 4m, and Pewsey 5m. 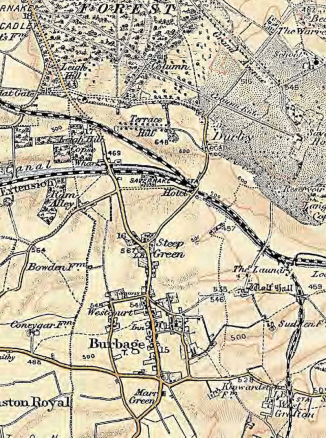 Burbage & Stibb Green at the end of the 19th Centuary 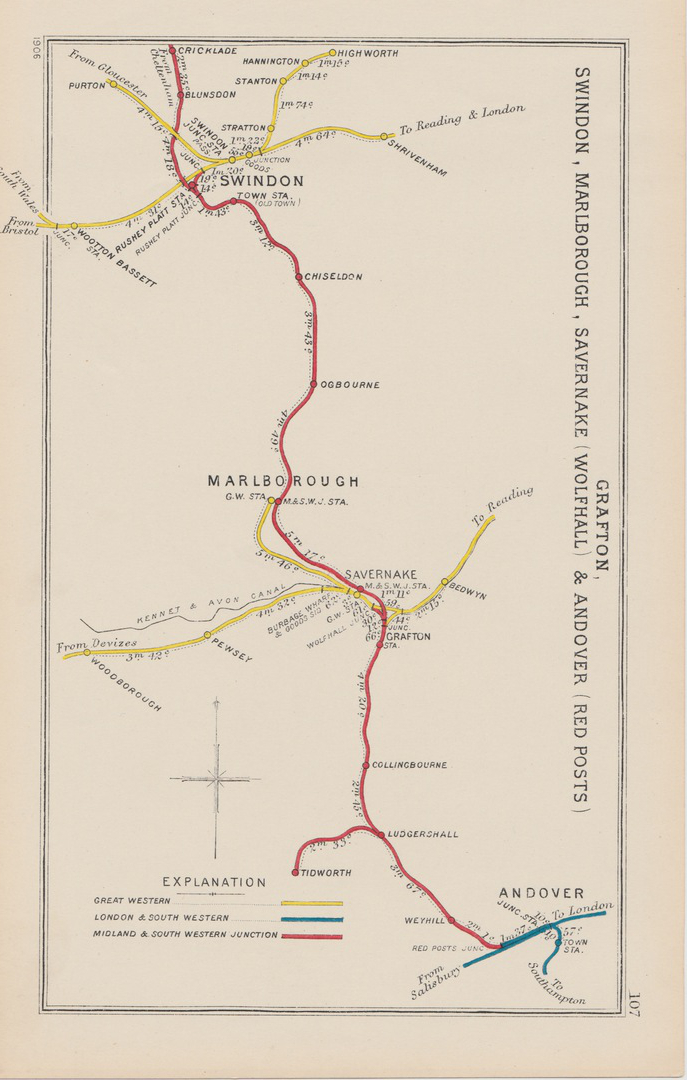 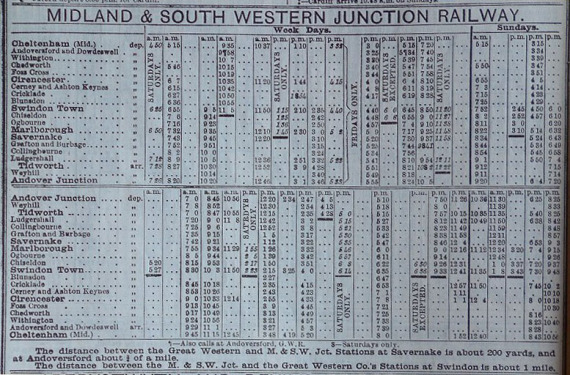 Midland & South Western Junction Railway (M&SWJR).  The decision to link Cheltenham and Andover by rail was taken at a meeting held in the Forest Hotel, Savernake on 25 May 1872.  The Swindon, Marlborough and Andover Railway Act was passed the following year but it was not until 1898 that the line was completed covering about 60 miles from Andoversford to Andover.  Additional lines were added to serve Tidworth (a new Garrison) in 1901.  The M&SWJR ran 39 locomotives painted ‘Midland Red’ with coaches in the same livery.

During the South African War 10,000 troops were transported by 22 special trains in one day in August 1901.  In the Great War the M&SWJR ran 6452 troop trains, and 1488 ambulance trains carrying 3.2 million officers and men, 13500 horses and stores and equipment.

The railway map was issued by the Railway  Clearing House in 1906.